Free shipping on all orders over $45. 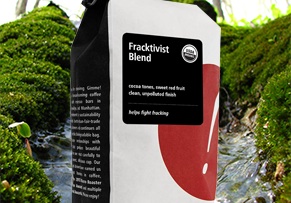 Almost two years ago to the date we released our limited edition Fracktivist Blend to support the fight against fracking in New York State. Since its release in December 2012 a portion of proceeds from each bag sold has been donated to agencies committed to protecting the environment in the Finger Lakes and across New York state, totaling over $30,000 in donations over the last two years.

Today, this mission comes to a very happy closure. Following Gov. Andrew M. Cuomo’s administration announcement last Wednesday that it would ban hydraulic fracturing in New York State because of concerns over health risks, we will be retiring its Fracktivist Blend at the end of January. We are incredibly pleased with this outcome. Coffee is our livelihood, and coffee is 98 percent water, so if we don’t have access to good water, that’s a problem. W

e thank our customers and all the organizations that have worked tirelessly over the last years in supporting environmental advocacy. We intend to redirect the remainder of the premium generated from sales to Gas Free Seneca, a local organization working to oppose Inergy Midstream‘s (now Crestwood) proposal to store Liquefied Petroleum Gas and expand natural gas storage at facilities on the shore of Seneca Lake, thereby jeopardizing one of the largest sources of freshwater in the United States, the health of countless residents, and the vitality of the entire region. With our commitment to think globally and act locally, we will certainly be pursuing other causes that affect our immediate and global communities.